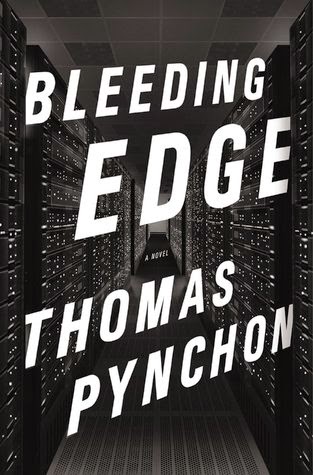 Set in 2001, Pynchon's Bleeding Edge is a surreal, insightful, paranoid and funny novel about the time when the Internet started to accelerate its creep into all our lives. Set in New York, the book follows Maxine Tarnow, a Fraud investigator who has lost her licence, as she gets drawn into a web of hackers, left wingers, neo-conservatives and dot-commers, centred around weird goings-on at a tech firm called hashslingrz.

I haven't read Pynchon's last book, Inherent Vice, but I understand it surprised many people . It seems it was a reasonably straightforward humorous noir thriller, while Pynchon fans are used to sprawling, weird and confusing post-modernist narratives in which everything and nothing might be a clue to some vague yet vast conspiracy. With this in mind, Bleeding Edge feels like a combination of Pynchon's older work with some of the tricks he may have learnt from trying his hand at a more conventional genre. The confusing cast of characters, shadowy government activities, paranoid conspiracies and joyously complex sub-plots running through this novel all reminded me of Vineland, but unlike that earlier book, Bleeding Edge follows a single protagonist all the way through, and while the narration is third person, almost everything that happens is focalized through the wise-cracking New-York-Jewish consciousness of our heroine, Maxine.

Pynchon has often been an anarchically comedic writer, and in some ways, Maxine's spunky persona made me wonder whether the author wasn't trolling his super-serious, high-lit loving audience by paying his respects to Janet Evanovich. But Bleeding Edge's protagonist is also reminiscent of Raymond Chandler's Marlowe—a tireless, sardonic investigator in a corrupt world, where the odds are always stacked against the little (wo)man, and where supporting cast members will suddenly turn up dead in observation rooms under swimming pools. In fact, Pynchon seems to be doing for New York in the early 2000s what Chandler did for 1930s Los Angeles. Bleeding Edge lifts the lid on late capitalism to show the grubby reality beneath, where tech firms are laundering operations for Mossad donations, there's no clear line between corporate interests and the CIA, technology is always led by military innovation, and nobody really knows whose side anybody is on.

The term "bleeding edge" appears only once in the text and is used to refer to the most advanced technology: Not just cutting edge, but bleeding edge. However, the title seems also to refer to the ways in which one thing will tend to bleed into another, until all certainties disappear and the question of choosing a side may be moot. Morally guided Maxine finds herself experiencing an unhealthy attachment to a sadistic, neoliberal hitman with a long history of torturing and murdering South Americans in the name of US interests. Deep web application DeepArcher, a kind of metaphysical VR simulator that supposedly operates beneath the surface of the Internet, appears to be a portal of some kind, and may even house the dead. Random number generators cease to be random on September the 11th, and a video appears that apparently shows American agents practicing a dry run on a roof top with a rocket launcher some days earlier, ready to shoot down the planes should one of the pilots bottle out. By the end of the book, the virtual world and the real world have melded together in subtle ways, foreshadowing the way the Internet really would colonise all our lives over the decade following novel's end.

I really liked Bleeding Edge. I love the little details as much as anything: The tech nerd with a foot fetish; the man with a forensic capacity to smell things, whose private hobby is attempting to reconstruct Hitler's scent; the young graphic designer who has spent years and a small fortune trying to get her hair to look exactly like Jennifer Aniston's does in Friends; Maxine's secretary, who almost always speaks in a kind of ironic Blaxploitation jive; the sinister presence of the novel's off-screen villain.

But more than all this, Bleeding Edge is one of the first fictional books I've read that really tries to address the world as it is now. It is a comedy, but it is also deadly serious. In going back a few years to the start of the century, Pynchon is able to say everything about where we are today. It really brought home to me the way in which we are all trapped in the Web; how even those powerful people we assume to be in some kind of control are really just avatars, working within pre-scripted scenarios—as free as the protagonist of a third-person shooter.
Posted by Vince Stephen at 07:47